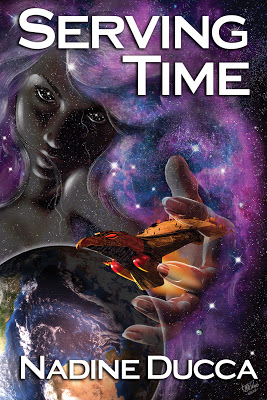 I asked some questions about Nadine Ducca’s new book, Serving Time. These are her answers.

What is your story about?

When interplanetary pilot and smuggler Tristan Cross decides to do good for a change, the universe seems bent on stopping him.

Serving Time was released on May 2, 2013. Some might say it’s a fantasy story that takes place in a dystopian futuristic universe. Others might tilt their heads a little, squint, and say it’s actually a science fiction story placed in a fantasy universe.

Whatever the combination, Serving Time offers something for both sci-fi and fantasy lovers: adventure. With “kidnapping by demons” and even some “scary in the head scenes,” Serving Time is probably best described (by fellow sci-fi author Ivan Borodin) as a “brain-melting cocktail.”

Let’s check the novel’s description for a better idea:

Life and death have been industrialized. The Forge, the birthplace of every soul, is a rumbling factory owned by the goddess Time, managed by Lucifer, and powered by the labor of demons and imps. In this dystopian world, a renegade interplanetary pilot running from his past doesn’t stand a chance.

Handling Neptunian meth and dodging security cannons are all in a day’s work for Tristan Cross—not that he’s one to complain. Working for the smuggling company StarCorp is an improvement over what he used to do for a living.

However, when StarCorp gives Tristan a one-way ticket into the brainwashed—and disturbingly suicidal—Loyal League, he decides to run from the company and start a new life in the only safe haven he knows: Earth. With the help of his brother, Tristan embarks on the most hazardous journey of his life, one that will place him at Time’s mercy. Little does he know the demons running the universe are craving a feast, and his own soul is the next item on the menu.

What made you want to write this book?

I’ve always loved to write. Even as a small child, I used to ignore my classmates’ moans and grin whenever the teachers sent us a writing project for homework!

My mother had an old typewriter, and she’d let me use colored sheets of paper to write up my stories. One of the first I remember writing was a pop-up short about several astronauts visiting the moon. I was around 7 or 8 at the time. Another favorite of mine was a fully-illustrated short about the creation of life on Earth, the differentiation of animal species, and finally the arrival of the first spark of intelligence through the intervention of an unknown external entity. Looking back on it now, I’m amazed at the complexity of the topic, and the resemblance to the first chapters of 2001: A Space Odyssey makes me smile (I was about 8 when I wrote the short; I didn’t even know about Mr. Clarke’s work).

Unfortunately, once I grew older, “life” got in the way of writing. First there was university, and then work, and then university again. Once I had finished my master’s degree, I decided I couldn’t put my passion aside any longer!

Serving Time stems from a short story I wrote as a teenager. Why I chose to expand this particular short and not another, I honestly can’t say. However, I’m very happy I did!

What was your greatest challenge in writing this story?

One of the greatest challenges while writing Serving Time was tying up all the scenes and loose ends. I wrote Serving Time in a very self-indulgent and erratic way: one day I was planning Chapter 3, and maybe the next day I was editing Chapter 18, only to jump back to flesh out Chapter 4 a little while later. I wrote what I felt like writing at each moment. The problem with this technique is that it’s easy to leave gaps that—oh no!—need to be filled.

Luckily for me, I knew perfectly well what has to go in the gaps (it was all in my head and notes). However, there were many days in which I just wasn’t inspired and whatever I wrote came out looking like a big pile of goop.

Here’s a secret: Serving Time contains 40 chapters. The very last one I wrote was Chapter 15. Yes. I wrote Ch 15 after completing everything else in the book!

Who is your favorite character? Why?

Without a doubt, I adore the heroes. Tristan is an adorable pessimist and his down-to-business attitude in the face of adversity is something I admire. Eneld manages to pull off sweet and naughty at the same time, and I feel a bit sorry for him because he gets involved in all the action against his will—which results in him running around like a headless duck for more than one chapter!

However, heroes aside, there are also several secondary characters who deserve a shout-out, too! One of my favorites is Robert Westbrook, the overly ambitious, supercilious and downright awesome demon master. I guess what I like about him most is that, even though he might look inoffensive at first, deep down he’s probably the most ruthless and dangerous character. He’s been one of my favorites ever since I decided to include him in Serving Time, and I’m ecstatic to give him a much bigger role in the sequel, Making Time.

What has surprised you about writing this story?

Without a doubt, my imagination.

Serving Time started out as a soft science fiction short story, then it evolved into a science fiction novel, and finally a science fantasy series. Along the creative process, I had exciting and surprising “light bulb moments”: in the shower, while cooking lunch, while walking down the street, in the middle of the night… I had to find ways to hold on to these new ideas, so I kept a note pad near.

Once, I was making lunch and suddenly it hit me: “A demon! Yes, of course! Now it all makes sense! A demon, to warn him!” I couldn’t stop to write at that moment, so I grabbed my i-Pod and recorded the conversation that was quickly taking shape in my mind. The result of this flash is the first scene in Chapter 3.

Nadine Ducca writes her blog, Nadine on Writing. Serving Time is available now from Amazon on Kindle and paperback.

Serving Time by Nadine Ducca
My rating: 4 of 5 stars

Serving Time hits the ground running with vibrant characters, a complex world, and a good sense of humor. The moment that I read wrinkles in time were actual crows’ feet on the face of the goddess of Time, I knew I was in for a fun ride, and the rest did not disappoint. The book kept pulling me back in and I had to keep reading until I reached the very end. I’ll be looking forward to the sequel!

View all my reviews