Last week, I featured an excerpt from the YA Urban Fantasy novel Fairy, Texas by Margo Bond Collins. Continuing with the book tour, here is my review! 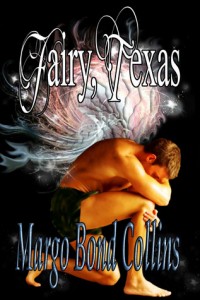 I received a free copy of this book in exchange for a review.

This book looked great from the start because it hit so many of my favorite things: fairies (the classic mysterious and powerful kind, not the cute little Victorian pixies), contemporary/urban fantasy that isn’t a Buffy clone, small towns, and high school stories. Now, many stories with these combinations are not so hot (although I read them anyway). But Fairy, Texas did a fairly original twist and I was definitely entertained by the ride.

So Laney moves to a little town called Fairy in the middle of rural Texas and finds out that, surprise! There are fairies (or demons, or possibly something else—their name for themselves is just The People, because they have The Power, and I did wish that the story had been a little more specific) and they are all very interested in poor Laney for some reason. Now, I thought at first that Laney was just the new kid in town who happens to stumble onto the mystery that no one wants to talk about (the dead boy she finds on her first day of school), but turns out that the fairies actually think that she might be the prophesied Special One.

What I didn’t expect was how funny Laney would be. She’s a little sarcastic and witty but she doesn’t take it too far into snark. She was also smart, and took in new information pretty quickly instead of being confused for long, which kept the plot moving forward at a fast pace. Since Laney sets the tone for the story with her first person narration, it’s important for her voice to be readable. I definitely connected with her from the first page on.

There were a lot of twists and turns as the story progressed, with Laney trying to figure out what was going on and figuring out how to handle it, and it kept me turning pages to find out what would happen next. There were a few surprises that I actually didn’t see coming.

The love triangle in the story didn’t do so much for me. It was an original take on a love triangle, because the two boys weren’t just competing for the sake of getting the shiny thing and they were still friends despite the competition, but in the end it was pretty obvious that only one of the boys was a real choice. And this is my major problem with love triangles: if only one of the love interests would work from a narrative perspective, then I know right away, and ‘finding out’ over the course of the story is just dull. Also, I just didn’t feel a connection between Laney and the boys beyond the physical attraction and it was hard to tell how much of that was due to magic.

But the relationships between Laney and her family members, her beloved mother and her new stepdad and stepsister, were definitely realistic. It showed some of the difficulties of adjusting to a new blended family. Laney’s mom and her new husband had to work on combining their different parenting styles, because both wanted to set different rules. (Grounded for a whole week because Laney skipped one class to talk to a different teacher? I’ve never met a parent that strict!). Also, the rivalry between Laney and her stepsister Kayla was perfect (and entertaining).

Sadly, the relationships that get left behind are Laney’s new human friends. It was nice of her to try protecting them from what was really going on, but avoiding them and not telling them anything was a bad move. Sadly, I don’t think Laney’s going to get a second chance to fix that in the future. And I’ve got a feeling that she’s going to need more support than just one fairy boyfriend with what she has to deal with next.

My Favorite Meal
Food didn’t play a big role in the story and usually only got a passing mention. The characters went to hang out at Sonic a lot, which kind of made me want one of their drinks (but not the weird vanilla-flavored onion rings). But none of the food was memorable.

Funniest Moment
Most of the funny moments come from Laney’s remarks about the things going on, adding dry humor (even when her life is in danger). But I laughed out loud at the scene where the two boys stage a fight over Laney. I won’t go into too much detail of why it happened, but like Laney, I didn’t see it coming.

My Recommendation
Overall, I enjoyed the story and I will definitely be looking forward to the next book in the series. I recommend it to anyone else who likes Teen Urban Fantasy without the gritty city noir, and who doesn’t mind if the romance takes a back seat to the plot.

Preorder Available: The Trouble with Fangfrogs

Why I Will (Not) Use My Religion in My Stories