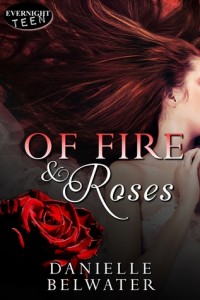 Nathaniel West’s mother is dead, his father a lost cause. Anger has become a way of life, until he meets and falls in love with Cora Ewell. Only Cora has a secret, one that could kill them both. An age old dark magic resurfaces and it becomes a race against time for Cora and Nate to find the long buried secrets to saving everyone they love and each other. After a near fatal accident leaves Nate in limbo, he must find a way to get through to Cora before time runs out and she is forced into life eternal with the evil wizard, Elias Stafford.

This book was a light, entertaining read about a boy who must save a mysterious girl from the curse on her family. I thought the premise was unique and played out in unexpected ways–the ending in particular was a twist that I didn’t see coming. I enjoyed the rich, descriptive prose and the paranormal elements about how ghosts could influence the human world. Also, it was a nice break from most paranormal romances to have both teen lovers be humans.

However, the book had some problems, some of them technical. It’s written pretty roughly–in many places there are long run-on paragraphs where several different characters’ actions blend together, so sometimes it was difficult for me to figure out who was doing or saying what. It’s a common beginner’s mistake, and I know this is the author’s first book, so I think she could have benefited from the help of more experience critique partners or a professional editor.

From a structural point of view, the pace of the novel is very fast, with the whole story taking place over only a few weeks. That means the main characters fall in love the moment they see each other, before they have any kind of conversation. Of course that helps to raise the stakes because their lives are immediately in danger from the jealous ghost, but as a reader who finds “insta-love” in books unrealistic, I didn’t feel very invested in their relationship. But I think that might be part of Nate’s personality to get attached to people very quickly, because he also starts calling another boy his best friend right away.

If you can get past these flaws, though, it’s a new twist on the story of a boy saving a doomed girl from paranormal forces. It’s my hope that the author continues to grow and the next installment in this series is better polished than the first.

Favorite Dish
Nate cooks for his dad and usually resorts to easy food like pasta or baked beans, so there wasn’t a lot of tasty food in this book. But after all of their trips to the local diner, I found myself craving a milkshake.

Bonus: Ghosts
I love a good ghost story, and Elias Stafford didn’t disappoint me. His jealous rage has kept him haunting Cora’s family from the grave. But he wasn’t the only ghost–and the last part of the book that deals with how ghosts can influence the mortal world was definitely the most exciting. There are specific rules and limitations that the main characters are bound by, and I was happy that it stayed consistent all the way through.

My Recommendation
Fans of paranormal romance who want to see two humans falling in love will probably enjoy this book.