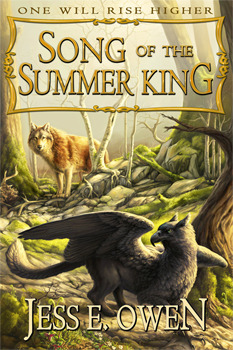 Shard is a gryfon in danger. He and other young males of the Silver Isles are old enough to fly, hunt, and fight–old enough to be threats to their ruler, the red gryfon king.

In the midst of the dangerous initiation hunt, Shard takes the unexpected advice of a strange she-wolf who seeks him out, and hints that Shard’s past isn’t all that it seems. To learn his past, Shard must abandon the future he wants and make allies of those the gryfons call enemies.

When the gryfon king declares open war on the wolves, it throws Shard’s past and uncertain future into the turmoil between.

Now with battle lines drawn, Shard must decide whether to fight beside his king… or against him.

I mentioned recently that the Self-Published Fantasy Blog-Off (SPFBO) had introduced me to a number of new fantasy novels that I was interested in reading. As time allows, I’ll be adding my own reviews for some of the books that were entered into the contest. I’m not one of the official judging blogs, so these are my opinions only and don’t count toward the contest, but I thought it would be interesting to share another perspective for some of the books.

I actually read Song of the Summer King last year on my own. It’s the only book out of 300 in the contest that I was already familiar with. I really enjoyed it, so I hope it does well in the contest, but the judges may have a different opinion than me (and I’m not reading as many books as they are, so there could be better ones that I’ve missed).

The challenge of writing animal characters is to make them have personality and be sympathetic without making them too human. This book is notable for the depth of the gryfon characters and culture, without anthropomorphism. It’s a lush, beautiful story with wonderful world building.

If you know me, you know I love flying. The descriptions of flight are enough to grab my interest for this book. But it’s the characters that kept me going, and the fascinating world building. I definitely want to read more of this series.

There’s some borrowing from Norse mythology, but the more obvious comparison is The Lion King (or rather Hamlet). But while the story is familiar and lives up to those that came before, there’s also a surprising twist and mystery to keep it fresh. Overall, it’s one of the more original fantasy novels that I’ve read for some time.

It’s hard to write more without simply gushing, so let me just say that if you like fantasy with animals and rounded characters who aren’t purely good or evil, you should check out this book.