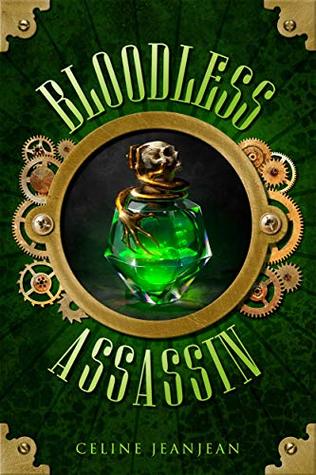 An assassin with a fear of blood.
A street girl with a big mouth.
They can’t really be the city’s only hope?

When Rory discovers Longinus’s blood phobia, she makes him a deal. Train her, and she won’t ruin his reputation as a lethal assassin.

What she doesn’t expect is that her new master has more eccentricities than a stray dog has fleas.

And that in aligning herself with him, she now finds herself in the crosshairs of another, far more dangerous assassin.

Now, not only does Rory have to keep herself and Longinus alive, she has to stop a conspiracy that threatens to bring the city to its knees.

It’s even harder with Longinus under the delusion that he’s the hero of the story. That would be funny, if it didn’t make Rory want to throttle him.

I’m noticing a trend, maybe, in steampunk/Victorian novels which feature a young female protagonist and an older male mentor. Particularly in the Teen/YA age group. Not that this is bad per se, but I feel like the general attitude is women can’t do much on their own in Victorian society so they need a man to help them. And their relationship often turns romantic, which feels icky to me because (1) the age difference for vulnerable young characters (age differences aren’t always bad, but a 17/18 person is still finding herself and an older partner can easily manipulate them), and (2) teachers shouldn’t date their students no matter the age.

Anyway, I mention this because Bloodless Assassin avoids most of these problems. Their city is steampunk but women have equal independence. Rory mostly knows how to take care of herself, she is learning certain skills from Longinus but they have a different power balance because she’s blackmailing him. He also doesn’t appear to be much older than her (the character ages are nebulous). And there doesn’t seem to be any romantic attraction between them, at least in the first book. Instead there is grudging respect and the beginning of friendship.

On to the things I liked! The whole city is fascinating and unique. It has some inspiration from Victorian London but it’s also clearly tropical and racially diverse. The mystery kept the action moving quickly and I didn’t guess the outcome, so I loved the surprise. The snarky banter is great. Every character is vivid and memorable. I look forward to reading more about them.

There is a giant mechanical spider, but it doesn’t threaten the main characters. (In case you’re an arachnophobe, like my husband.)

Also, the food sounds delicious. I don’t like coffee but the butterscotch drink made my mouth water. I want to hear more about Longinus’s extravagant wardrobe.

I recommend this book to fans of Lindsay Buroker, H. L. Burke, and Terry Pratchett. If you like quirky humor, unique fantasy worlds, and kick ass heroines, you could enjoy this book.

The Impact of Fiction