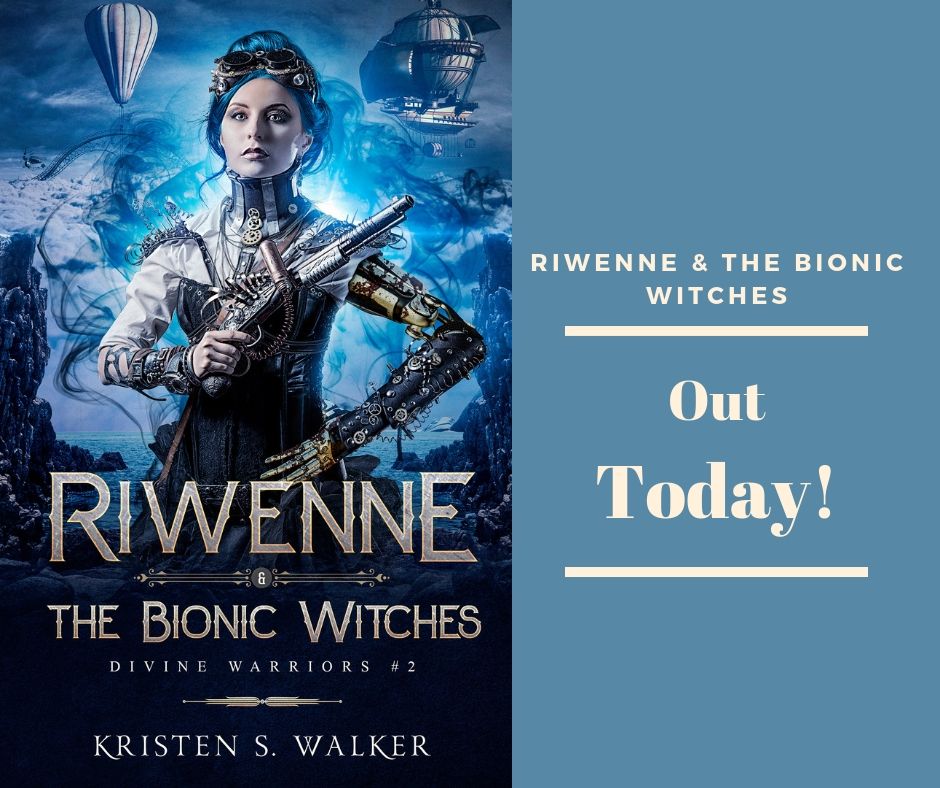 The first book took 21 years to write. Book 2 only took me a year and a half. It felt like forever because I was struggling with carpal tunnel and other health issues. I hope book three will be faster… stay tuned for exciting news!

But today, I’m so excited to finally share Riwenne & the Bionic Witches with the world!

Betrayed by her sister. Hunted by the empire. She gave up her normal life to become a divine warrior—then she lost the magic she needs to survive.
Riwenne escaped the capital in the sky with her life and most of her friends, but one loss haunts her. Her sister, Nexita, betrayed them all. Now Riwenne’s out of magic, and nowhere is safe for the divine warriors. Defying the Empire put a price on their heads. With nothing but an airship and a few gods on their side, they need a new way to fight back!
When she learns that their enemy, the sun goddess, is arming bionic witches with blood magic, Riwenne can’t ignore her mission to save the innocent. The only magic that can stop the sun is the moon goddess. But the moon goddess was banished, her name is forbidden. Riwenne must search for ancient clues to free the moon.
As she struggles to regain her magic and find her place in the team, Riwenne is tempted to give up the fight. But nothing can ever be the same again. Sooner or later, she’ll have to face the one person she dreads—and this time, the fight is to the death.
Can she kill to save the people she loves?

To celebrate the release, both books are on sale today! You can get book 1 for 99c for the next month. Book 2 is still at the special release price for $2.99, but it’s going up to full price tomorrow. Now is a great time to try the series!

A clumsy school girl with the magic of a goddess. Mechanical beasts attacking her friends. Can she become a divine warrior and save the floating city?