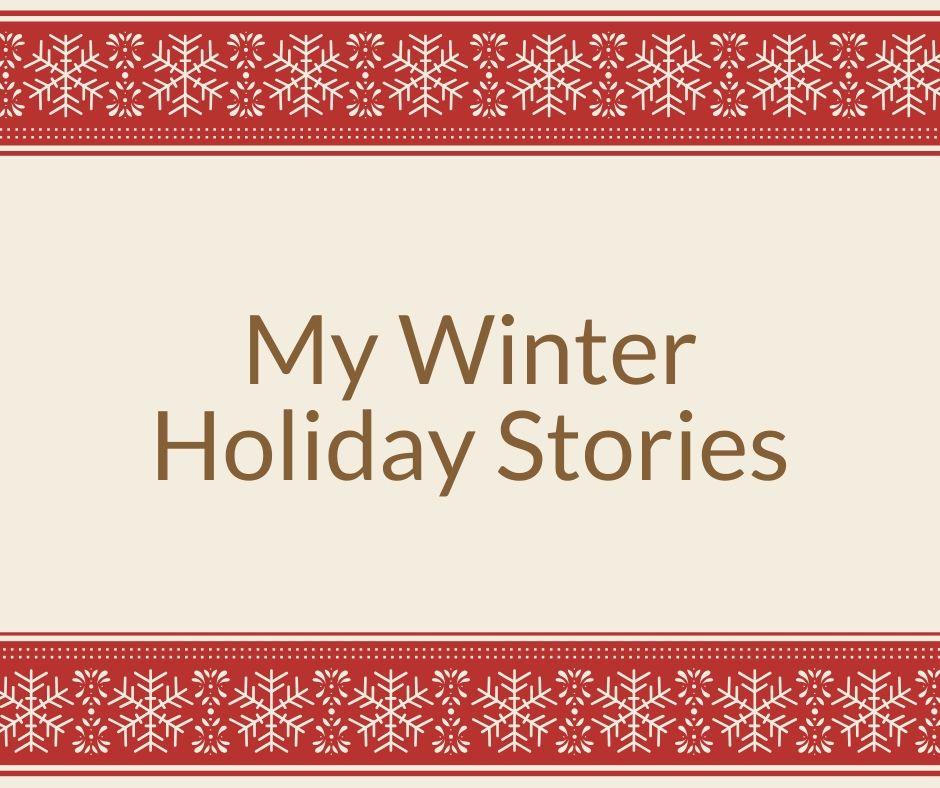 Usually, I take some time off during the final month of the year to spend time with my family and enjoy the holiday season. It’s right after the whirlwind of Nanowrimo and I’m not thinking about publishing.

But this year, I participated in a Christmas short story challenge (yes, at the same time as working on my Nano novel), and I ended up with four stories that I’d like to release for the Winter Holidays. One of them mentions Christmas, while the other three are more about the Winter Solstice. (Some of these are fictional worlds so Christmas doesn’t exist, and their holiday celebrations are a little different.) They will all be available in an anthology from the challenge soon (probably next week), but I’m also releasing them for individual sale.

There are four stories because I wanted to set one in each of my series. That means if there’s a favorite character you’re waiting to hear about, you’ll probably find something you like in the next few weeks! That includes Wyld Magic, a series that has been on hold, and the first official release for Santa Cruz Witch Academy. These aren’t full novels (and one is actually a re-release of an old story), but hopefully, it’s enough to whet your appetite until my next book release. They are releasing one a week from now until the Solstice. Here’s the short of it, then more details below:

These two stories were previously available, published in 2014, but have been out of stores since early this year. I’ve re-edited, re-formatted, and given them shiny new covers. They’ll be back on Amazon by November 29.

How bad can one little love potion be?

Teen witch Rosa wants sparks to fly on Midwinter Solstice for all her friends. Love potions are dangerous, but she’s hoping for a little boost to get everyone in a holiday mood. Getting lost in the Otherworld wasn’t part of the plan.

When the friends wake up in Faerie, can they find their way home with their relationships still intact?

Sixteen-year-old Ashleigh is half-Fae, but all she wants to do on her summer vacation is relax like any human girl. But her best friend, Glen, is too busy training for his test of knighthood to hang out. He won’t have any free time until the Midsummer Solstice.

Then Ashleigh overhears a plot to sabotage Glen’s quest. He’s been sent to take down a dragon—a fight he can’t hope to win. She must find the secret of the dragon and warn Glen before it’s too late. But if he fails the quest, he’ll never reach his dream of becoming a knight. And their friendship may never be the same again.

Vilqa’s Gift for the Sea Goddess

The champion of the sea goddess must lead the holiday ritual to thank the sea. But if they can’t even read the words, how can Vilqa find the perfect gift?

Vilqa got the opportunity of a lifetime to serve the sea goddess, Sawycha. But being a Divine Warrior comes with lots of responsibilities, and Vilqa is struggling to keep up. They’re still learning how to read, and their leader, Riwenne, wrote down the ritual instructions with very messy handwriting. Vilqa needs help to decipher the ritual and figure out the right gift to show gratitude on Winter Solstice, the holiday for the sea.

Vilqa only has one day to prepare and avoid total humiliation.

The Ghost on Winter Solstice

A ghost appears in a pregnant woman’s room on Winter Solstice Eve. Is it a warning for her future or revealing secrets of the past?

Mercenary-turned-duchess Korinna is about to publicly announce her new pregnancy on the Winter Solstice. But a ghost appears in her bedroom the night before, making her fear for the unborn child’s life. When she asks her husband for help, both are surprised to find out the truth about the spirit.

Dedicated to those who have served in the military and paid the ultimate sacrifice.

What’s the best Christmas gift for the witch who has everything?

Brie spent months planning the perfect Christmas gift. She’s finally applying to witch school, just like her mom always wanted. But Mama Rosa thinks her daughter should stay close to home, and Brie has her sights set on another school across the state.

Can Brie convince her mom to let her apply, or will her Christmas surprise backfire and ruin the holiday?

I hope you enjoy these new stories and have a happy holiday season!