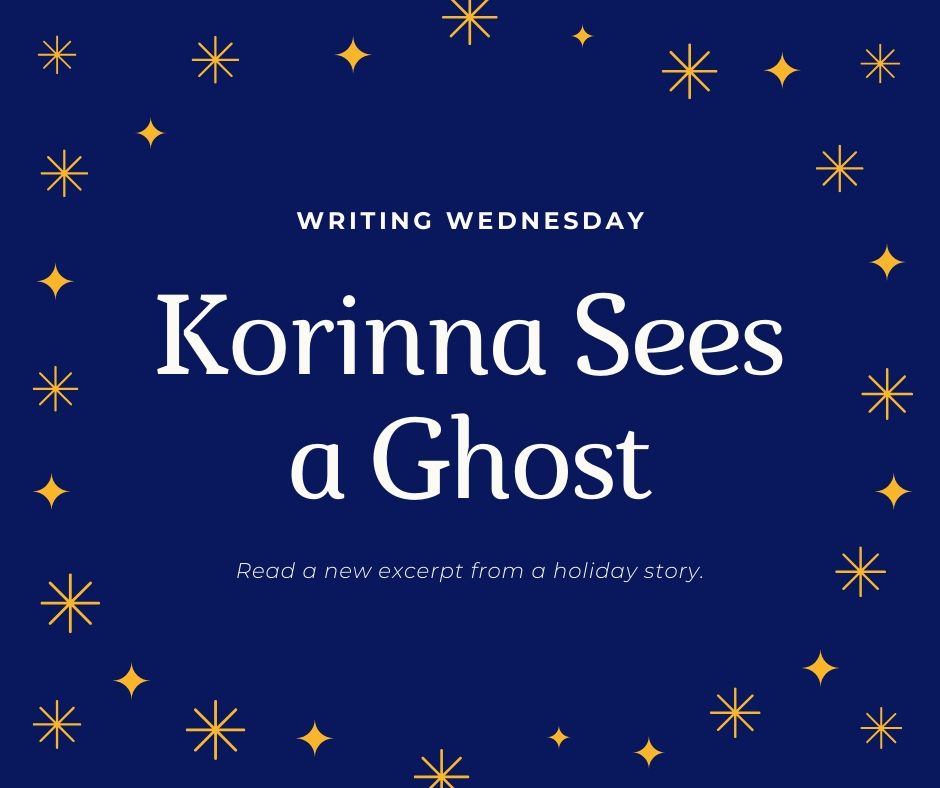 When I started A Flight of Marewings, I wanted a powerful image that would start the story with urgency. I thought of the scene in Hamlet where he sees his father’s ghost and tries to communicate with him, but the ghost cannot speak, so Hamlet has to guess what he wants. The frustration Hamlet feels and his doubts about what is the right thing to do torment him for the rest of the play. Similarly, Korinna sees her father’s ghost at the moment of his death but he cannot tell her anything, so she has to solve the mystery of his murder.

But Wyld Magic is a series with a lot of death, much of it violent or otherwise premature, so there should be more than one ghost lurking around, right? I decided to get into the “holiday spirit” literally, haha, with a spooky tale about another ghost haunting Korinna during a vulnerable time.

In the timeline, this is in the middle of book 2, A Pride of Gryphons, right after Korinna and Galenos came back from the cloudfruit harvest with the marewing riders. She’s just told Galenos about her pregnancy and had a visit from the midwife. They argued about how careful she should be in her condition. And now she gets on extra edge because of the ghost’s appearance.

The Ghost in Korinna’s Bedroom

Korinna sat up and gazed into the darkness. She didn’t know what had awoken her, but she had a feeling of dread. Straining her ears for unusual sounds, she heard nothing. Yet her stomach had tied itself in knots. This wasn’t mere queasiness from rich food or her pregnancy. Something must be wrong.

She let out a breath and saw it like smoke in the air. When had it grown so cold?

Movement in the moonlight that streamed in through the window drew her gaze. A shadowy figure stepped away from the balcony door. She could make out the shape of a man, but not his face.

Korinna threw off the bedcovers and grabbed the dagger from her bedside table. She dropped into a defensive stance. “Whoever you are,” she growled, “I’m warning you that I’m not an easy target.”

The figure turned toward her and held out his empty hands. Then it dissolved into thin air.

Korinna rushed to the spot but found nothing. She swept back the curtains, checked the locks on the door and windows—all was secure. The house still felt chilly, but no longer freezing.

Scowling, she lit a candle and inspected her room, even opening the wardrobe and peeking under the enormous four-poster bed. There was no place where an attacker could hide.

The duchess shivered and made a sign to avert evil. Either it was an old memory from her time as a mercenary, or a ghost had visited her.

It wouldn’t be the first time she’d seen spirits of the dead. A year and a half ago, after the old duke, her father, died, his shade had visited her several times. He had never spoken, but seemed to be trying to communicate with her. She guessed that he was worried about her and the future of his family’s legacy. Since she had taken over the duchy and set up a shrine for her late parents, she didn’t expect to see him again.

This ghost felt different. And she didn’t think it was a coincidence that it appeared just after the midwife had confirmed her pregnancy.

She looked out the window but saw no signs of dawn approaching. The coming day would be busy as the city celebrated the Winter Solstice, full of official functions. She needed her rest. But she felt too unsettled to sleep, and much as she hated to disturb him, she had to tell her husband.

“The Ghost on Winter Solstice” is available on Friday, December 13th.

NaNoWriMo: Ahead of Schedule & Fully Funded!