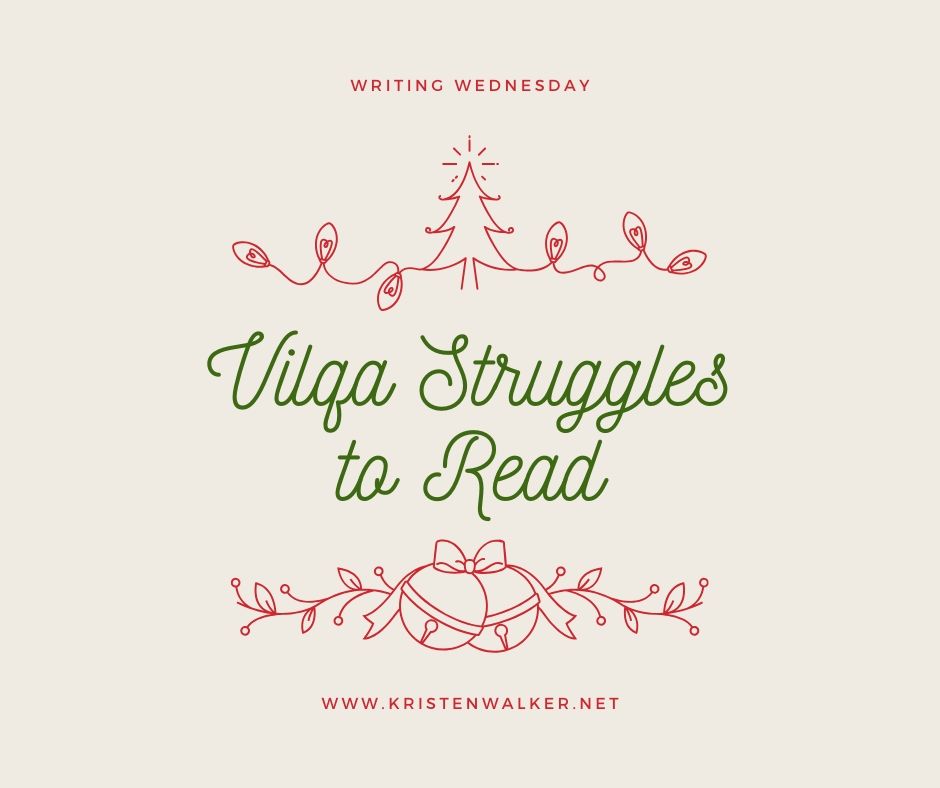 The winter holiday story for the Divine Warriors series takes place after book 3, Riwenne & the Airship Gambit, during the Winter Solstice. Part of the struggles of the divine warriors is that they have to change their whole culture’s traditions because they are all wrapped up in honoring the sun goddess (and no other gods). That means with each new holiday, they have to invent another ritual and a purpose to the celebration. Sometimes they can uncover older traditions from before the sun goddess took over the pantheon but sometimes there is nothing for them to go on so they start from scratch.

Now, if you don’t know Vilqa, this is a non-binary character who was introduced in book 2. Vilqa prefers they/them pronouns. We don’t know a lot about their background because they grew up in a different town from the other characters, but they are the replacement champion of the sea goddess after Riwenne and they didn’t have the advantages of education that most of the other kids had. Riwenne, for example, grew up in the city which has the best schools, and Amena was taught by her mother who is a former city teacher.

But Vilqa didn’t get a lot of help in school and never really learned to read. They’re making up for lost time now but it’s a struggle, as you’ll see from the opening to this story. Here is a chance to get to know more about Vilqa.

I ran my hand through my blue-green hair nervously. I’d just cut it short to keep it out of my eyes while I worked, but it felt weird, especially in the cold weather. Kept meaning to buy a hat, but I hadn’t found one that I liked yet. It was hard to find something that didn’t look too masculine or feminine. As someone who identified as non-binary, I preferred to dress as gender neutral most of the time, but it seemed like fashion always went to the extremes.

I squinted at the scrawled lines again, trying to make them out. Five months ago, I couldn’t read much more than my own name, Vilqa. With the help of my new friends, I was studying all sorts of things, and I could read printed words pretty well. But when it came to people’s handwriting, especially sloppy people like Riwenne, I had a much harder time.

“I can’t even tell what half these letters are supposed to be,” I muttered under my breath.

The paper was supposed to describe the new ritual Riwenne and our high priest, Eberet, had written for the Winter Solstice. Traditionally, the holiday was meant to celebrate the Sun Goddess, Chysa, and help her gain strength for the Longest Night. Temples all over the Arqan Empire would be sacrificing llamas and other livestock in Chysa’s name. But since our rebellion had declared war on the rest of the empire and the Sun, it would be contradictory for us to follow the old ways.

So, after some brainstorming among all the Divine Warriors, we’d decided to change and honor the Sea Goddess, Sawycha. The winter was a season marked by heavy storms blowing off the ocean. Since our city, Lyndamon, was floating in the middle of a bay, we were at the mercy of every squall. Our new ritual would thank Sawycha for all the gifts of the sea and ask for protection from the storms.

There were lots of prayers to memorize and a song written by one of our friends, Amena. Since there were seven of us warriors who led the rituals, I could usually hide in the back and mumble if I didn’t know all the words. But that wouldn’t work this time. I was the champion of Sawycha. Everyone expected me to take the lead. The one thing I could make out in this ritual was all the parts labeled “Vilqa” but I couldn’t see what I was supposed to do.

Who could I ask for help? Riwenne was researching more prayers for the ritual with her girlfriend, Kyra, in the temple library. My other friends all had their own jobs. Janera was gathering flowers in the gardens, Nexita and Deryt were tinkering with mechanical devices, and Amena was rehearsing with the other musicians. I didn’t want to interrupt anyone’s work with my troubles.

“Vilqa’s Gift for the Sea Goddess” is available on Friday, December 6th.