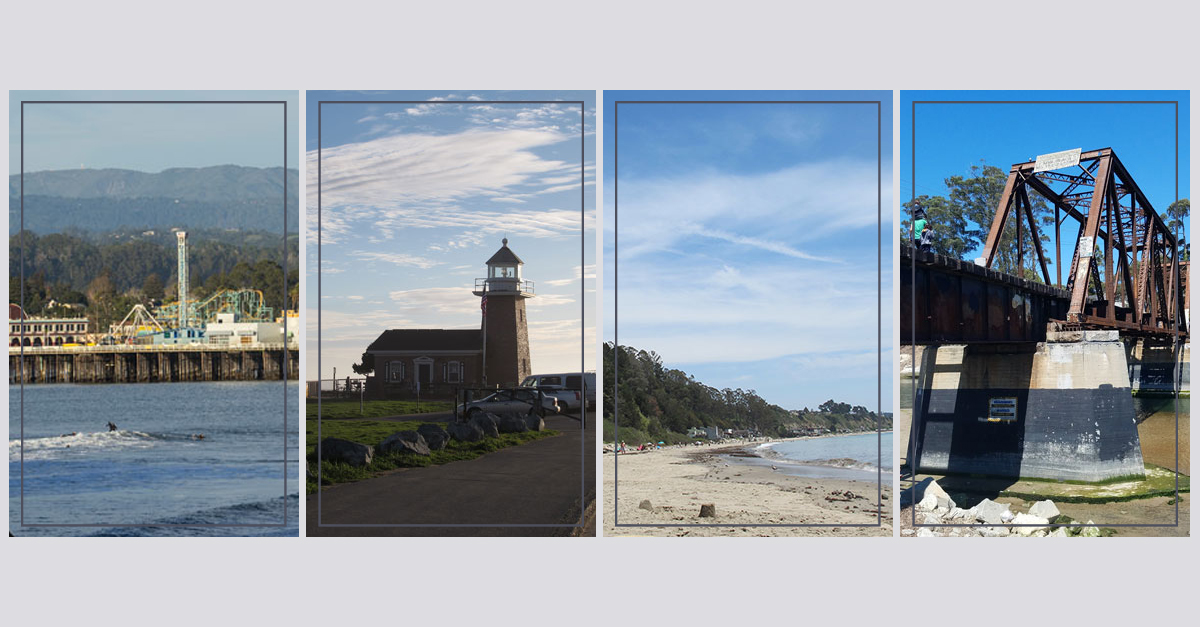 My newest book series takes place in a town I know well, Santa Cruz. I’ve actually lived in several towns in Santa Cruz County, including SC itself, Aptos, Boulder Creek. Ben Lomond, and Scotts Valley. The Reluctant Witch includes some notable landmarks from the area and also a few places that I’ve made up, including the Santa Cruz Witch Academy itself (although it’s inspired by a few real places).

There are actually two lighthouses, one over by West Cliff which looks out to the ocean (since it’s the edge of the bay), and one at the entrance to the harbor. But when people talk about the lighthouse, this is the one they usually mean.

From the lighthouse, you can look over the cliffs to the water. It’s a great place to watch the sunset on the western horizon. If conditions are right, you can see the green flash right as the sun disappears.

From the lighthouse, you can also get a great view of Fisherman’s Wharf and the Santa Cruz Beach Boardwalk. And it’s a popular place for surfers. Brie comes here early in the book to surf and sees a mermaid hiding from the crowd.

Brie mentions the Boardwalk in the story but doesn’t go there in the first book. You’ll read more about it in the second book, The Salty Witch.

Movie fans might recognize this bridge for the railroad tracks which is next to the Boardwalk. It’s featured in a famous scene from The Lost Boys. The vampires hang off the bottom of the bridge while a fog machine fills up the scene below so it looks like they’re very high up. Visitors are often surprised when they see this bridge in person and realize that it’s actually much closer to the water–hardly a death-defying trick! (Still, this river can get quite shallow, so I don’t recommend jumping off of it.)

There are many beautiful beaches in Santa Cruz but some can be crowded with tourists. I wanted a more private beach for Brie to speak with her mermaid friend, and New Brighton is close to the location for the academy. It’s sheltered by cliffs and trees. When the weather is nice, you might still see a lot of locals, but it’s nowhere near as popular as the main beaches. And if you go during the colder months, often you can be the only person there.

A Peek at My Plan: The Salty Witch