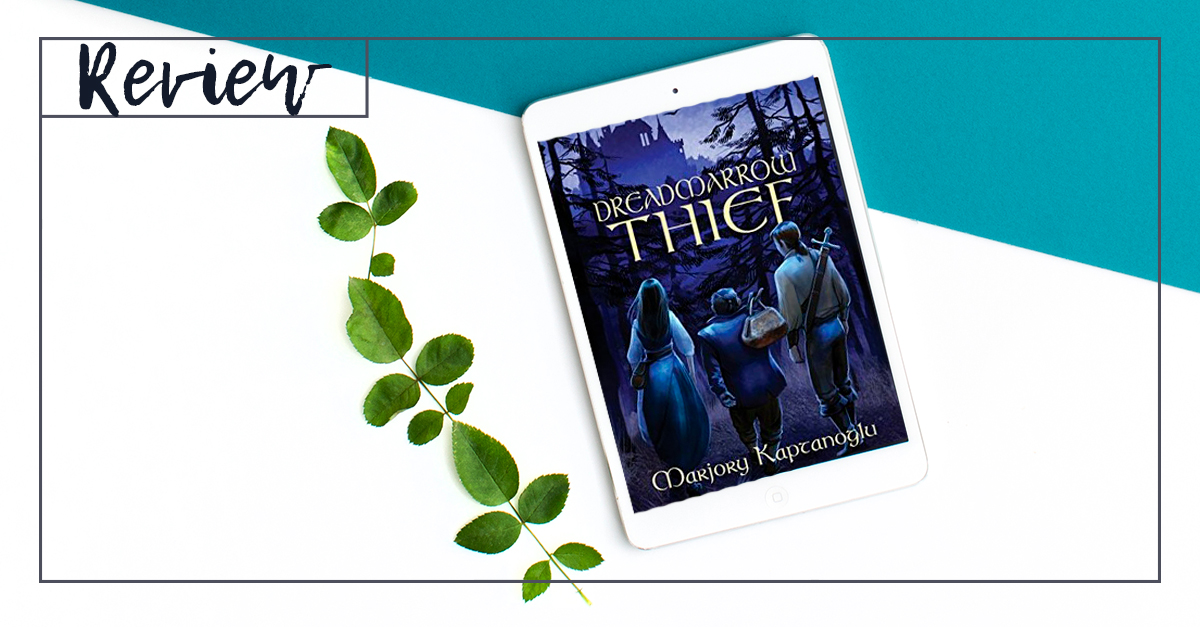 SEEKING LOVE, REVENGE, AND A CURE FOR DEATH…

In this thrilling fantasy adventure, sixteen-year-old Tessa Skye shapeshifts into a sparrow using a windrider—a forbidden magical amulet. When she accidentally reveals herself to the wicked Conjurer Lord Fellstone, the tyrant has her papa killed. Overcome by guilt and remorse, Tessa sets out for the castle to steal Fellstone’s Dreadmarrow, his most prized magical artifact, which has the power to restore life. She’s joined by Calder, searching for his lost love, and Ash, whose growing attraction to Tessa distracts from his plan to avenge his murdered twin.

DREADMARROW THIEF is an enchanting coming-of-age story about a girl who seeks to wield great power, only to learn it comes at a terrible price.

First question: what is a dreadmarrow? Apparently it’s just a fancy name for a magic wand, carved of black wood. It sounds like it should be made of a bone (which contains marrow) but it’s not. Also, somehow it works by “catching and diffusing” sunlight, which doesn’t make any sense unless there was some sort of crystal or lens on the tip. But no one questions this as weird, which is just one of the problems I had with this book.

Second, this book was recommended for the LGBT+ list of SPFBO books but I didn’t find any references to LGBT people unless one of the characters comes out in a later book in the series. All three of the main characters expressed interest in heterosexual relationships.

Third, there’s just too much going on in this book. It feels very rushed along from one storyline to the next without giving any of them a chance to breathe. One of the three main characters seems like more of a plot device than a fully-realized protagonist, which is only emphasized when he drops out of the action for a considerable section of the book. But the other two characters have more than enough plotlines between them. I think there was space for maybe three of these plots:

In short, none of these stories or themes were explored very well. The pace is very quick, jumping from one event to the next without giving the characters much time to think or process their reactions to anything. As such, the emotions feel very shallow and confused. I didn’t feel any real connection between Tessa and Ash, for example, even though they were both supposed to be attracted to each other.

It’s supposed to be for a teen audience, but while it deals with dark subject matter (like death and torture), it didn’t feel like YA to me. The short, choppy scenes and shallow emotions read more like the style of a middle-grade novel. Especially since it was supposed to be describing difficult subjects, I didn’t think it had enough depth for its intended audience.

Some parts were entertaining, like reading about Tessa as a sparrow, but overall I had trouble getting into this book and the characters. I don’t plan on reading more of the series.