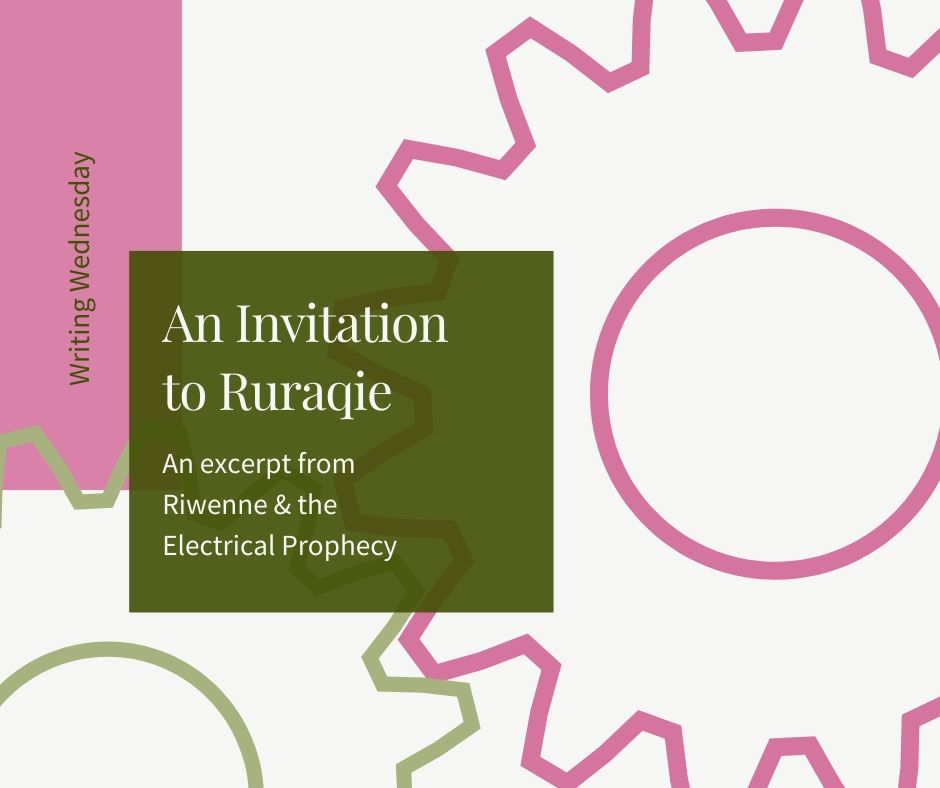 I’m a third of the way through writing the latest Divine Warriors novel, and things are picking up steam. With each new book that I write, I challenge myself to try new things and reach outside of my comfort zone in exciting ways.

I’ve mentioned that I didn’t like writing too much about politics in the Wyld Magic series. This series is more about action and magic, but the main characters are also growing and maturing. Riwenne wants to avoid fighting and killing now so she has to turn to political negotiations to reach peace.

In today’s excerpt, Riwenne is meeting with Waytamayu, the prime minister of a neighboring nation. They’ve started building a trade port together and now the prime minister wants to discuss the next steps in their mutual agreement. He invites her to lunch and springs a new idea on her.

Lunch with the Prime Minister

“I wanted to speak privately first.” The prime minister popped a piece of mango into his mouth and leaned back in his chair. “About the future of our partnership.”

That sounded serious. I dropped my forkful of chicken onto my plate and forced myself to look up at him with a neutral expression. “I hope we have a long and mutually beneficial partnership. It’s certainly worked well so far.”

Waytamayu nodded, but his expression was hard to read. “Yes, this is a good first step. Now, what comes next for us?” He gestured above him vaguely. “By our agreement, this town will be a free territory. We’ve set borders between our lands, and the port will open up trade possibilities. But there are many more details to discuss.”

I shot a look at Kyra. “We’d love to get into those details, but the Council of Elders should be here for that. They handle all the decisions for Lyndamon. I know they have many proposals for you if you’re willing to hear more suggestions.”

Waytamayu’s eyes narrowed. “I’m open to their ideas, but that’s not what I’m most interested in.” He pointed at me. “There are some things that can’t be said over a radio channel with other people listening. I want to have a frank discussion with you, leader to leader.”

I squirmed uncomfortably in my chair, feeling my face grow hot under his stare. “I told you, I’m not really a leader.” I gestured at my friends. “The divine warriors listen to me, but we’re just a bunch of teens. The Council of Elders represent our city and I just act as their messenger. When I’m not speaking for the goddess herself. Did you want to speak with her?” Maybe not the best idea, but I couldn’t stop Quilla from appearing by herself.

Waytamayu leaned forward, his eyes boring into me harder. “No, I want to talk to you. I think you’re more important than you claim and I want to understand you better.” His face relaxed into a smile, but it looked fake now, especially since he was still staring at me under his half-lowered eyelids. “Of course, it should be in a more comfortable environment than this. That’s why I’m inviting all of you to join me in Ruraqie as personal guests.”

I swallowed hard. “All of… us?” My voice broke in a squeak. “The divine warriors?”

He nodded, glancing Kyra and Amena. “Yes, if you’re free. Bring any friends you like. Our city has a lot to offer. It could be like a vacation.”

Was there such a thing as a vacation when you were recruited by a god to rebel against a powerful empire? It sounded like a joke.