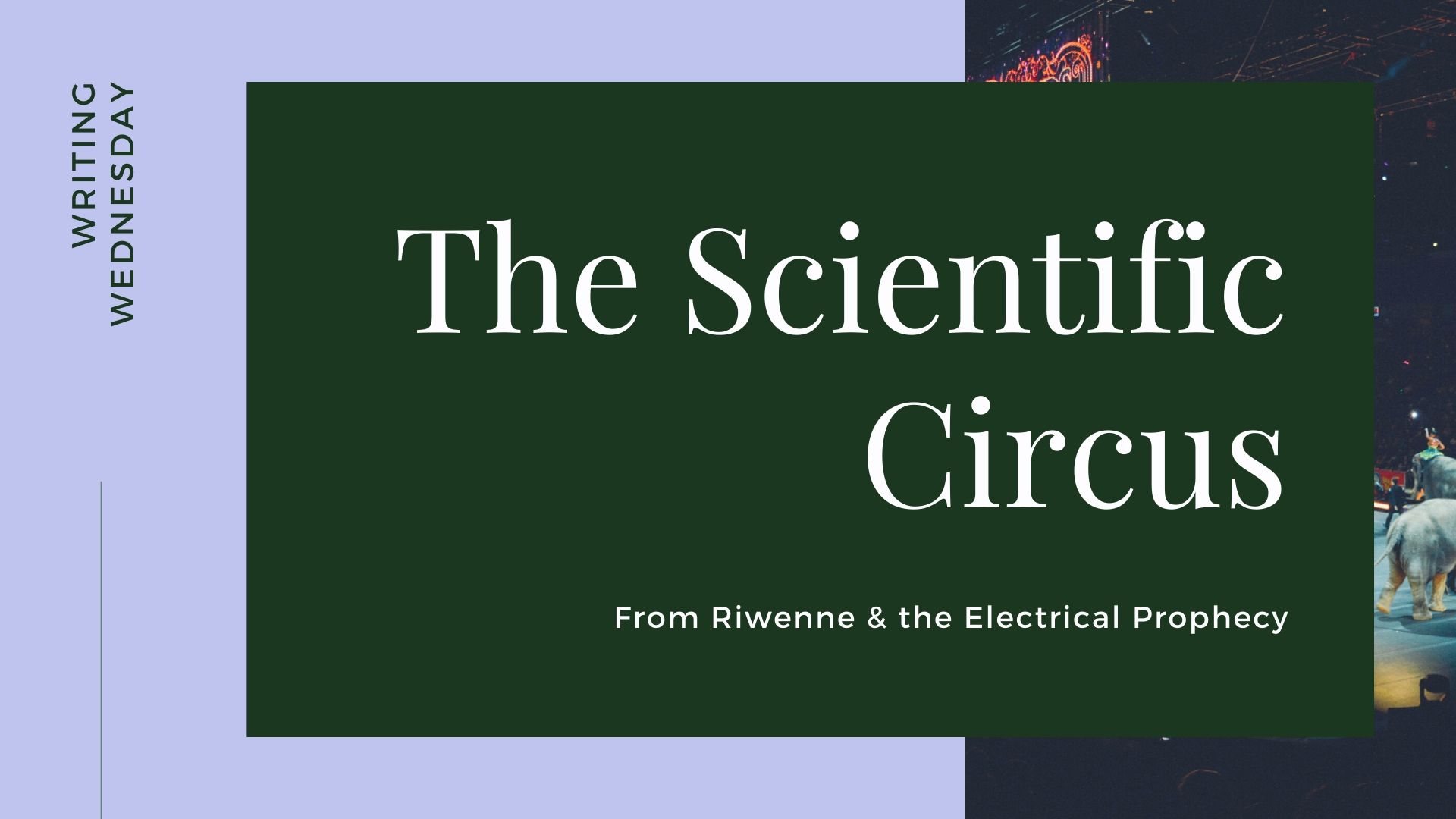 It’s time for another Writing Wednesday and an excerpt from my current work in progress, Riwenne & the Electrical Prophecy. Now, you may be wondering about the title of the book. What is an electrical prophecy? This is something which will unfold over the course of the story but it’s related to a new group that shows up when Riwenne is visiting the city of Ruraqie. Out of nowhere, a new show arrives called the Scientific Circus. Read on to see the first glimpse!

We looked up and saw an airship gliding down between the tall buildings. The maneuver was incredibly difficult to make, given the small amount of space, and I didn’t know why anyone would try to do it. Normally airships docked at the top of towers or out in much larger open spaces.

I looked quickly for imperial colors or another sign that this ship was a threat, but it didn’t seem to have any weapons mounted on its sides. It was a very colorful envelope, red and cream stripes, with a shiny copper cabin hanging below. And it was making a strange noise. As it came closer, I realized there were speakers projecting music. Fast-paced calliope music.

“Is that one of your ships?” I shouted to Waytamayu over the racket.

He grinned and shook his head. “No, but I think it’s a friend!” He pointed to a banner unfurling from the side. “We’ve been waiting for a visit from the circus!”

On a piece of yellow fabric bigger than my bedspread, there was an image of a red-and-cream striped tent and block letter words, “The Amazing Scientific Circus!”

We all stepped back as the airship got closer. The envelope was deflating as it seemed the whole thing was going to land right here, and that was going to make a mess when the deflated fabric collapsed to the ground.

But then the strangest thing happened. Instead of falling as the gas escaped, the envelope seemed to fold in on itself and take the shape of a big top circus tent. The cabin settled down and broke apart as mechanical arms emerged from inside. The strange contraption reshaped itself before our very eyes, building up more tents and carnival rides across the entire field: a ferris wheel, a carousel, a miniature train, even a little ticket booth at the entrance.

When the entire circus had set itself up as if by magic, the front flaps of the big tent flew open and all sorts of costumed entertainers spilled out. They danced to the cheerful music still playing from the speakers. Contortionists somersaulted and tumbled across the grass, a robed man with wild hair threw sparks from his fingers, a huge strong man carried a girl on either shoulder, and clowns threw stacks of fliers into the air, advertising the many attractions.

A crowd gathered on the street around the field, drawn by the sights and sounds of the circus. A whole school full of children must have opened their doors nearby, because the kids ran up laughing.

Waytamayu and Mano were both watching with delight, cheering and clapping at each new wonder that appeared.

Only my friends and I were standing on our guard, staring at the bizarre scene before us. This circus had shown up out of nowhere, landing in the middle of city without anyone knowing they were coming, and set up a whole elaborate setting right where Amena had been planning to hold her concert. But no one questioned why this was happening or asked if it was okay. Had they all gone mad?