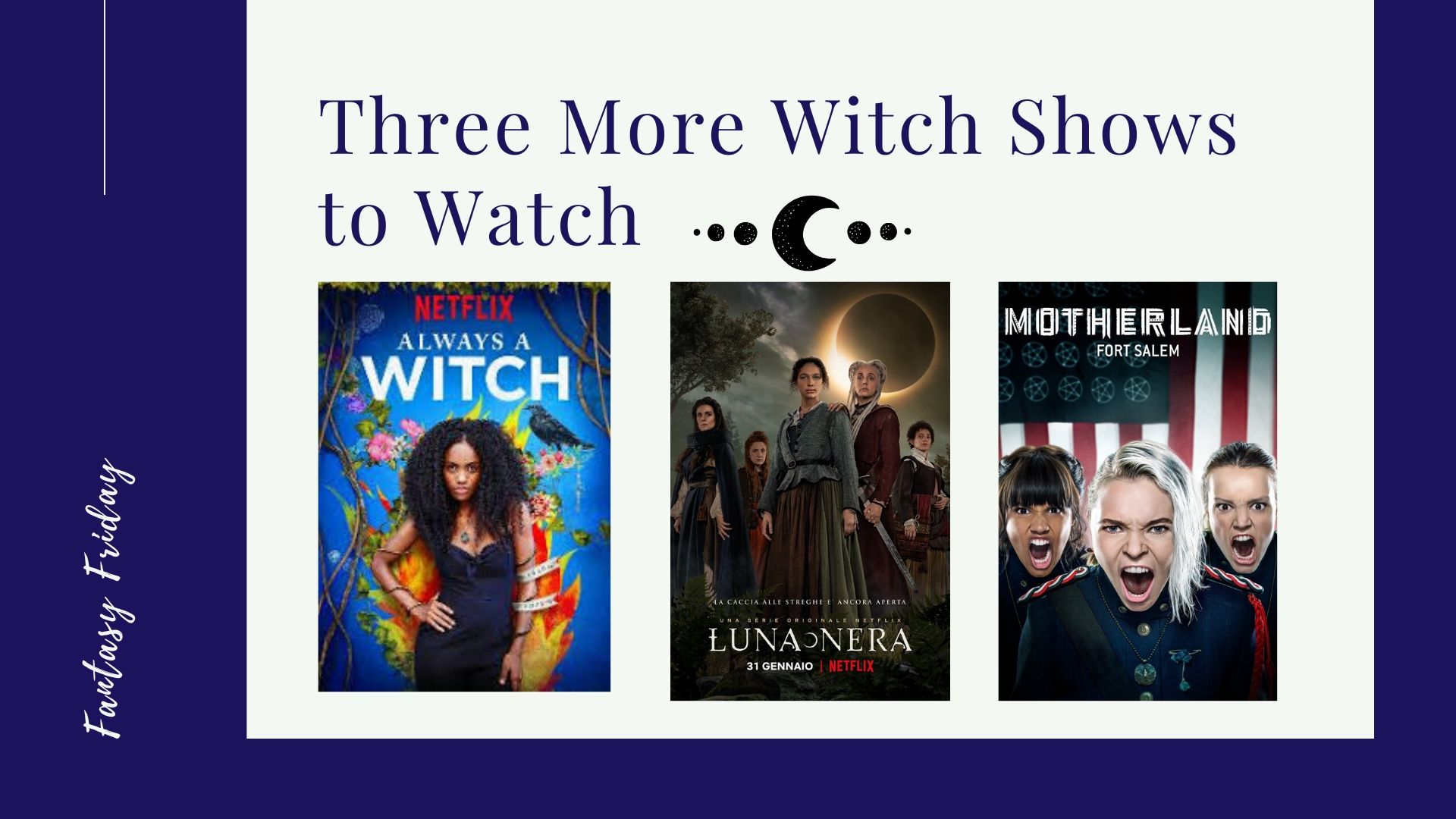 I’ve talked about my favorite shows featuring witches before, but more new ones come out all the time. Here are three more recommendations to check out if you’re looking for even more witch-y goodness.

I gave this show an honorable mention during the first season, but I hesitated to recommend it strongly because it had a major flaw. The main character Carmen, who was born into slavery but discovers her witch powers allow her to time-travel to the present day, where she can be free. But she was still in love with the slave owner’s son and went back for him. Hugely problematic and many people complained about it.

The showrunners must have noticed the complaints. In the first episode of season 2, they fix the problem because Carmen breaks up with him and he disappears. Season 2 also has more witches, pirates, magical tests, and a viral video challenge that goes horribly wrong. It’s fun and cheesy with traditional African magic, which isn’t often seen on TV. And Cartagena is a beautiful setting to enjoy watching.

I enjoy the diverse cast, the unusual magic, and the fun characters. If you didn’t like the issues with the romance in the first season but you otherwise liked the tone of the show, give this one another shot.

This show is filmed in Italy with an all-female production crew. It’s a historical series about the witch trials in 17th century Europe, focused on a young midwife, Ade, who is accused of witchcraft when she foresees the death of her patient. She finds out that she’s descended from a line of witches who have a secret fortress in the woods and she has abilities that can help save others. But while she flees to safety, her grandmother takes the blame and is captured by a family of witch hunters.

Ade has to master her powers, rescue her grandmother before she is executed, and help protect the other witches hiding from the law, but there are more secrets than she could possibly imagine. And a prophecy that a great change will soon come to the witches. Will Ade be the savior of women? Or will she forsake her destiny to follow her own path?

One of my favorite parts of this series is the soundtrack, written by an English band called Black Casino & the Ghost. I wasn’t familiar with this band before, but I liked them so much that they’re now one of my favorites. Just listening to the opening theme made me excited to watch this show. I can’t wait for season 2.

This is one of the more unique takes on witches that I’ve seen in a while. Set in an alternate version of the US, their history diverged from ours during the Salem Witch Trials. When Sarah Adler was about to be executed for witchcraft, she bargained for her life in exchange for using her powers for military defense. So, witches helped the United States win their independence and the country became a matriarchy–but girls who are born into witch families are drafted into the military and must train at Fort Salem. Magic is based on singing, often in harmony with other witches.

The series follows three girls who are new recruits at Fort Salem as they struggle with basic training. Raelle lost her mother in combat and doesn’t want to fight, but she doesn’t have a choice. Tally’s mother got a dispensation after all her sisters were killed in combat, but Tally chose to enlist anyway because she wants to help stop the terrorist threat. Abigail comes from a prestigious family who has high expectations for her to succeed and feels the pressure to do well. Since they’re a unit of three, their performance is judged as a group so they have to depend on each other.

I was afraid that this would be too cheesy or teen drama-y but it deals with serious topics and goes way more in-depth into the world-building and magic than I expected. Some reviewers compare it to The Handmaid’s Tale which might be fair because of the alternate history, although their world is nowhere near as bleak and dystopian (so far, although there are hints of more going on underneath the surface, like the gender inequality for men and the questionable nature of forced military service). I’m curious to see where it will go in the future.

Review: Heart of the Curiosity

Review: Of Fire and Roses