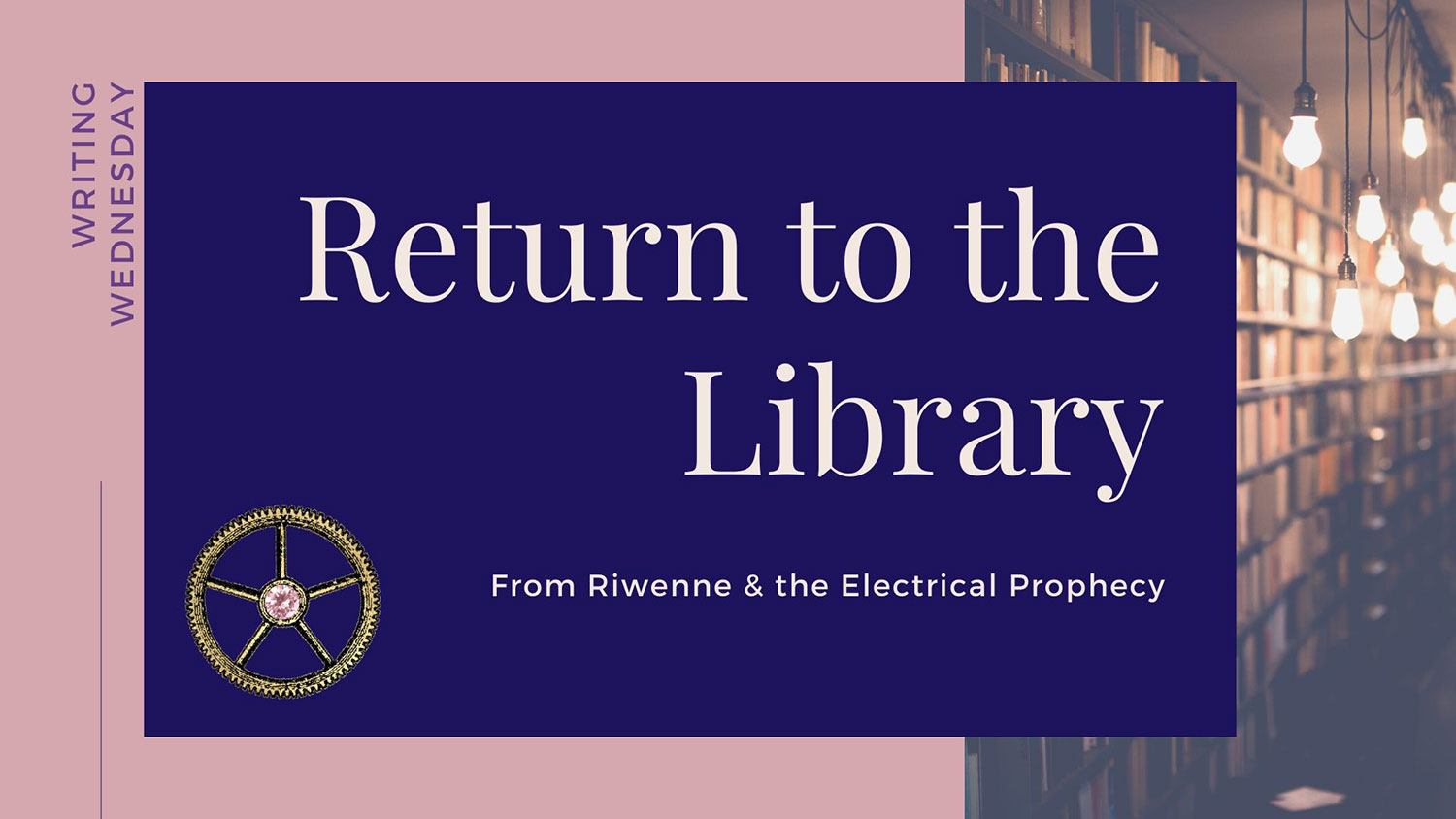 In the latest Divine Warriors book, Riwenne and her friends have returned to Ruraqie, an industrial city in the mountains. The last time they visited the local public library, a librarian gave them valuable information that helped them in their fight against the empire. Now that Ruraqie has declared their independence, even more knowledge has been freed from imperial censors. Riwenne and Kyra go with the prime minister’s wife, Parche, to see what else they can learn from the Lakeview Library.

The Secrets of the Schools

The librarian led us through the main hall, past rows of bookshelves and reading areas, to a narrow staircase descending into the basement.

Downstairs, it was still cool and dry with no windows to let in damaging sunlight. The rare books were locked behind a wrought-iron gate, and only the senior librarian who guarded it was allowed to go in and retrieve anything from the stacks. At Eberet’s old desk sat a middle-aged woman with short orange hair. She made us show our identification and sign in again.

Finally, she pointed to a cabinet along the wall with many little drawers. “Go through the card catalog and make your selections,” she said. “If you can’t find a card, that means another reader is using that book. Each of you may select up to three titles at a time and I will bring them to your reading room.” She ran through a list of other rules for looking at the rare books. We had to wear gloves while we handled them, none of the books could be removed from this area, and no food or drink were allowed.

The rules sound strict, but it was to protect these valuable tomes. Most of the books here were handwritten, pre-dating the printing press. All of them were old and fragile. Since records from before the empire’s founding were mostly destroyed or locked away in temples, these books were invaluable sources of ancient secrets.

I was so overwhelmed by the possibilities, I didn’t know where to start. Fortunately, Kyra had spent more time than me in our temple’s library, so she had a better idea of what we already knew. She flipped through the card catalog with expert speed, looking for titles that we’d never seen before. She pulled out six cards and handed half of them to me.

“All of these came from Irdemar’s vaults,” she said, her eyes sparkling with excitement. “Take good notes, because Eberet will want to know everything we can learn. One of them is a book of ancient hymns to the gods. Maybe we can find some new prayer material.”

That would definitely have stuff we could use. Most official prayers we knew were about Chysa, the sun goddess. We’d struggled to write new ones that could include the other gods. Any extra material we could get our hands on helped spice up our rituals, especially at the full moon festivals.

I went up to the senior librarian to give her my cards. While we waited for her to search the stacks, I looked at Parche. “What are you going to read?”

She shrugged. “I don’t know, I’ve never been down here before. I don’t have much book learning.”

“What did you do before your husband became the prime minister?” I asked. It had never come up before, and I was a little sheepish when I realized that I didn’t really know much about her.

Parche smoothed her skirts. “I worked in a dress shop, selling clothes. It was nice to see women come in and help them find pretty things to wear. My dream was to become a teacher, because I love children, but my grades weren’t good enough in school.” She shrugged again. “But then I met Waytamayu. He promised if I married him, he had enough money so I wouldn’t have to work anymore. Now I just support his political career.”

“That explains why you have such great fashion sense,” I said with a smile. “But if teaching is what you wanted, why don’t you go for it now? The priestesses don’t decide what you get to do. We can all follow our dreams.”

She looked wistfully into the middle distance. “Hmm. It would be nice to go into the schools and see the children. Perhaps…” She stopped and shook her head. “But Waytamayu’s career is more important.”

Kyra handed her a card. “You could do both. This is a book about how they developed the educational system for the empire. Maybe it will give you some ideas for how to change it.”

“Change it?” Parche said with a blank stare. “Why would we do that?”

I blinked at her. “Don’t you think the schools are cruel? They take babies away so they don’t know who their families are.”