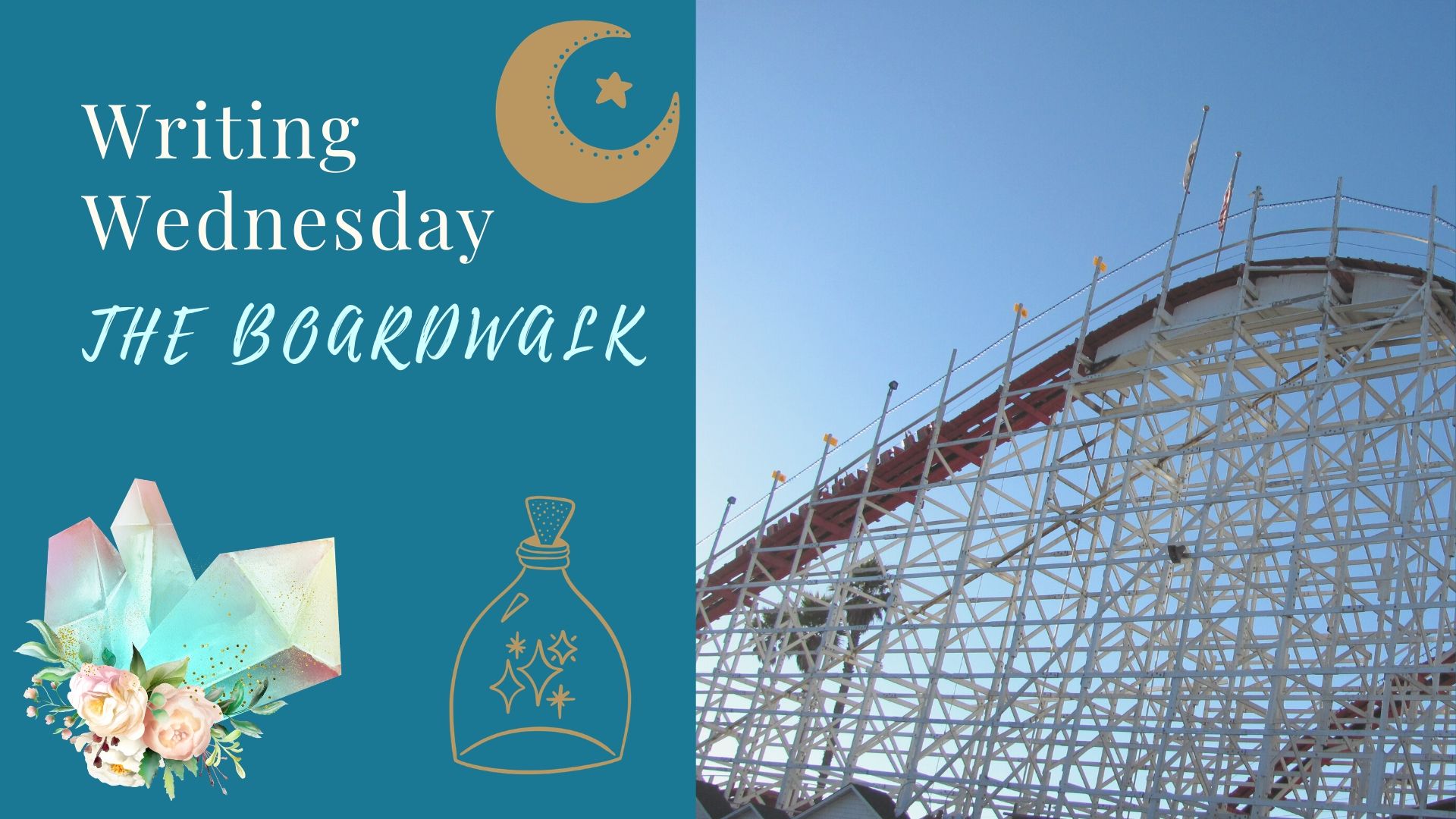 I’m sharing an excerpt from my upcoming book The Salty Witch. In this excerpt, Brie and her friends are going to the Boardwalk to hang out for fun after a long day of summer school. Brie is worried about spending too much money but her friends say that the rides are cheaper early in the week.

We picked up Erin on the way and drove to the Boardwalk. I couldn’t believe it when I saw how much they charged for parking, so I suggested that we look for a spot farther away and walk in. But Pamela insisted on paying, saying that she got a discount because she had a season pass, so we found a spot in the crowded lot and headed in.

I’d already made a budget ahead of time to plan how to stretch my money. With some money saved for dinner at a food counter, I could afford enough tickets for ten rides. My must-do rides were the Giant Dipper wooden roller coaster, the Logger’s Revenge water ride, and the Ferris Wheel, but I wanted to have extra so I could join my friends on their favorites, too.

The line was long to buy our tickets, but eventually we were inside. I was surprised how many people were there on a weeknight. There were plenty of families with young kids, but also groups of teens hanging around on their own. Humans mingled with magikin. Santa Cruz attracted ocean-loving races like water sprites and selkies, but there were also dwarves from the mountain mines, dryads and satyrs from the forests, and kitsune from the Japanese-American community in Watsonville. I looked around suspiciously but didn’t see any merfolk or faeriekin. But all the rides looked busy.

“What do you guys want to go on first?” I asked.

Pamela scanned the crowd. “I dunno. Do you think we should wait to see if it gets less busy?”

Erin pointed at the packed beach. “Actually, it’s going to get busier when it gets darker and those people come here from the water. We should prioritize our favorite rides and do those first.”

I grinned at Erin. She had good taste—the Giant Dipper was a classic.

“Oh, yeah, Undertow!” Erin said, nodding at Pamela. “The Giant Dipper is important, but that won’t fill up the most—the Undertow is newer so it will attract more of a crowd.”

‘Newer’ didn’t say much since the Giant Dipper was almost a hundred years old. But the Undertow was a new style of roller coaster that spun around and had a vertical drop of on an eighty degree slope. It was enough to make anyone nervous, and I had a secret fear of heights. I’d been avoiding the ride ever since it opened.

“Why don’t you two go on and I can hold your stuff?” I offered when we reached the line. Because the ride was so steep, riders were forced to put everything into a storage locker, even emptying their pockets so nothing flew out of the car. And the storage lockers cost more money.

Pamela shook her head. “We all have to go on together.” She popped several quarters into a storage locker and threw her purse in. “There’s enough space in here that we can all share one.”

Another Perspective on Lore vs. Innovation