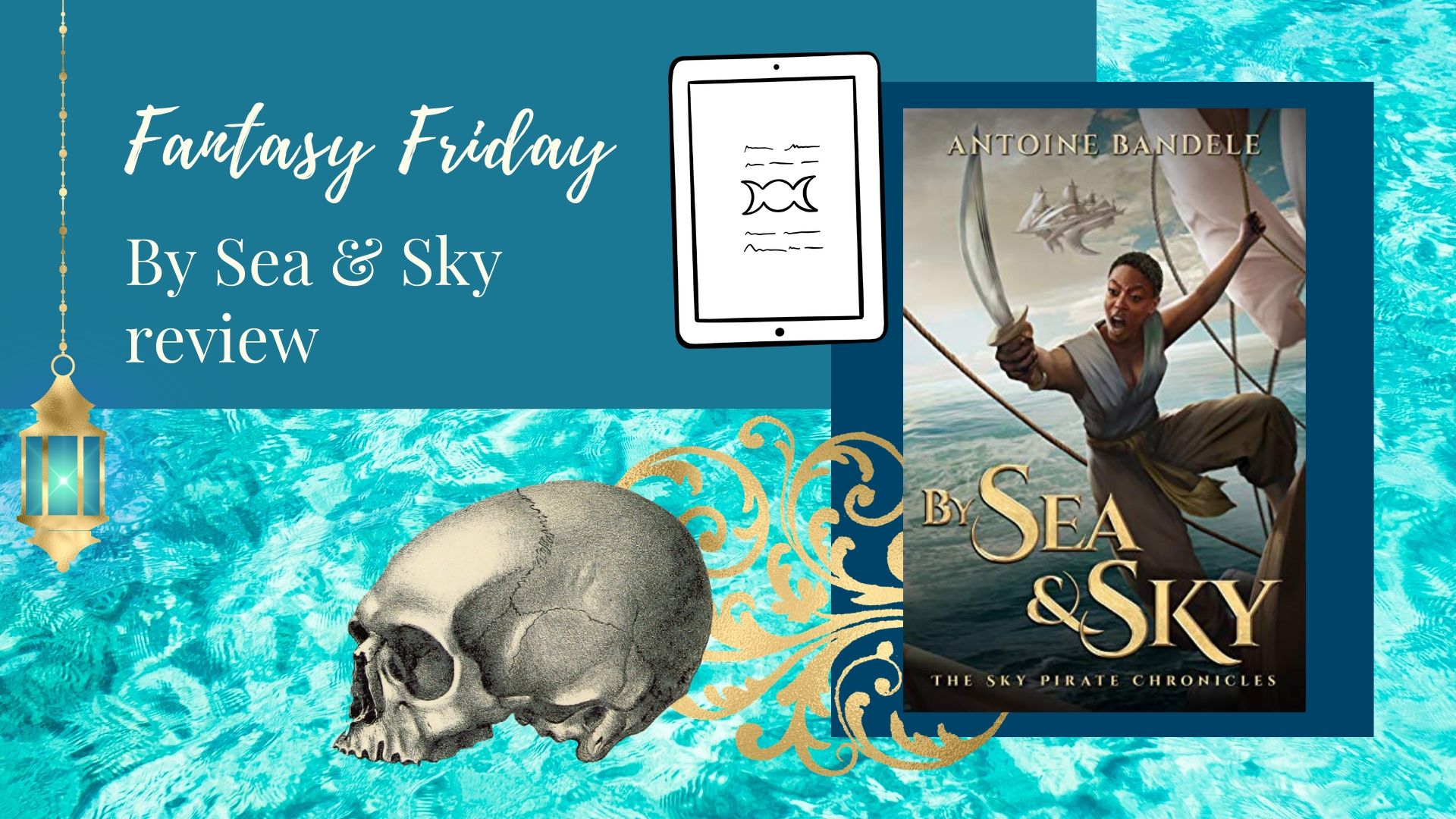 With no magic, no brawn, and no pirate crew, Zala seeks to steal back the one treasure that matters to her most: her husband.

To succeed she needs a ship—and not just any ship, but the latest, secret invention by the Vaaji Empire. An airship.

Zala will have to use her wits to overcome scoundrels and nobles alike on her journey through the clouds.

But if she’s smart enough, she may just have what it takes to save her husband—and go down in history as the first sky pirate.

Delve into a pirate fantasy inspired by the West Indies, The Swahili Coast, and Arabia, where Zala will encounter ruthless raiders, arrogant aristocrats, and imperial secrets.

Pirates and airships! What’s not to love?

I want to start by noting that the blurb for the story is actually a little confusing. It sounds like from the blurb that Zala’s husband has already been kidnapped from the start, so I was surprised to see him on the same ship as her in the opening scenes. In fact, it’s maybe halfway through the book before Jelani is taken. That doesn’t mean that the story is slow to start because there is action from the beginning as Zala is part of a pirate crew and raiding other ships on the high seas.

I really appreciated how realistic the descriptions were for the ships, both the ocean sailing and the airship, and fighting on the open sea. It wasn’t over the top with magic allowing them to do outrageous stunts or skimming over the technical aspects. The author has obviously done research into these areas. But it’s not bogged down with too many details like a historical novel, either. I felt there was a good balance between the story while still explaining the mechanics of how the sailing ships and airship worked.

Also, I felt like the characters were sympathetic on both sides. Karim and Zala are the two main viewpoints, one working for an imperial navy and the other working with the pirates, but neither one was purely good or evil. Karim was honestly motivated to help his crew despite the orders of an incompetent captain and he was working to earn money for his family. Zala was trying to take care of her husband’s health (and then later rescue him from being kidnapped) while also worrying about the safety of her friends and fellow pirates. Circumstances put them on opposite sides of the conflict, but it was hard to say that only one should win.

And as always, it was great to read a story set in a fantasy setting inspired by something other than generic western European cultures. It’s inspired by several cultures including the West Indies, the Swahili Coast, and Arabia, but it’s a unique blend that was very vibrant and refreshing. I’m curious to learn more about Esowon and read more stories in this world.

LGBTQ representation: two of Zala’s crewmates are men in a same-sex relationship and no one treats them differently for it. Zala even compares her marriage to their relationship and understands the bond they have for each other.

I highly recommend this book to anyone who enjoys adventures on the high seas with pirates and a little fantastical magic mixed in.