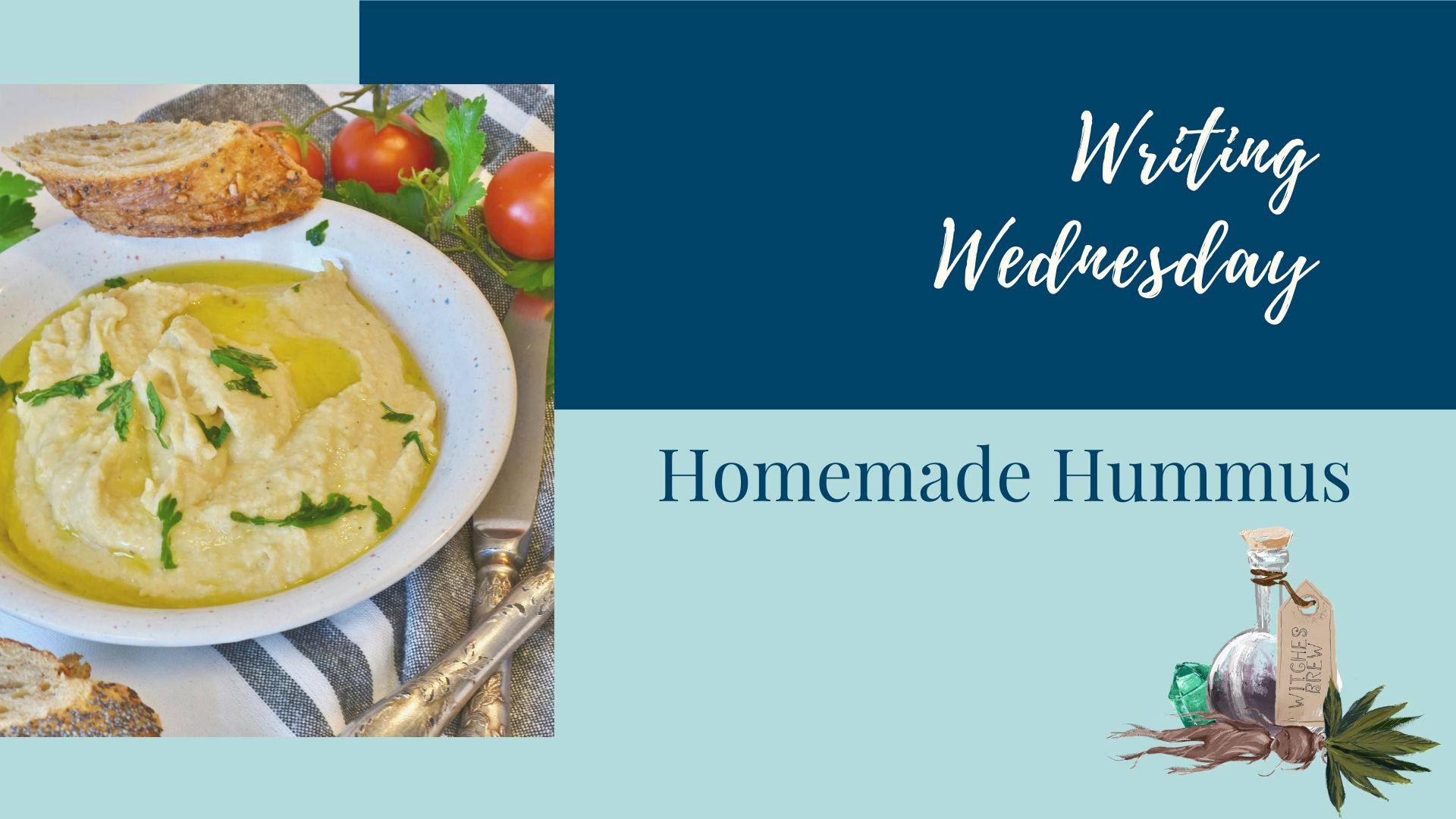 When Brie is at the Fourth of July picnic at the beach, her friend, Pamela, offers her some homemade hummus to try.

By the way, this is another scene inspired by real life. My daughter has been experimenting with hummus flavors recently. Fresh hummus is so flavorful and amazing, and it’s not that difficult to make. Reading this scene again is making me hungry!

After a long day in the sun at the beach, I was exhausted by the time evening rolled around. I lay back on my towel and watched the sun setting on the horizon. Luci was going to be here soon and then there would be fireworks, but I was struggling to keep my eyes open. It was hard to imagine that I would be able to stay awake until ten when the beach closed.

Pamela sat down next to me. “Feeling sleepy?” She pressed a cold bottle into my hand. “Here, I’ve brought emergency rations.”

I looked down and saw it was cold brew coffee. Sitting up, I eagerly cracked the top open and drank a long swallow. “Oh, thank you so much,” I said. Normally I didn’t drink caffeine so late in the day, but extraordinary times called for a little change in routine. “You’re a lifesaver.”

Pamela grinned. “Happy to help. The other thing they always say to stay awake besides caffeine is some protein.” She pointed at the fire pit. “We’re going to start up the bonfire soon and roast the hot dogs. But if you want a snack while that gets going, I have hummus and pita chips.”

“That sounds great. Lemme grab my veg.” I reached for my cooler and pulled out the veggie tray. The fruit had been devoured hours ago, but the fresh vegetables were the perfect thing to go with hummus—better to avoid a carb crash from the chips.

Pamela brought out a Tupperware container with fresh hummus and set it on the towel next to the vegetable tray. “I wanted to try making my own to see if I could get a better texture. Let me know if you like the flavor.”

As soon as she lifted the lid, the fresh scent of lemon hit my nostrils. The hummus looked amazing compared to the store-bought stuff we’d had the night before, so creamy and light. The top had a drizzle of olive oil and cumin sprinkled like cinnamon on a latte. I swirled a celery stick inside to get the full advantage of all the flavors and took a bite.

So many delicious ingredients met my tongue. The creamy chickpeas, smoky cumin, tangy tahini and lemon blended together in a glorious medley, and underneath it all was something that had sweetness and a faint bite. “Mm, that’s good. What’s in that?”

Pamela frowned. “We made so many batches, I don’t remember what we put in all of them. Mom, is this the one with the paprika?”

“No, that was the one with the Kalamata olives,” Mrs. Nguyen said, pulling out another container.

“You made more than one?” I said, my eyes widening. “Let me try all of them!”

I soon had all the hummus dips I could imagine. One had jalapeños and artichoke for a spicy kick. Another had sun-dried tomatoes, which didn’t have any of the gross squishiness of normal tomatoes. But my favorite one was the avocado. The green color looked unusual, but the creamy flavor was beyond amazing.