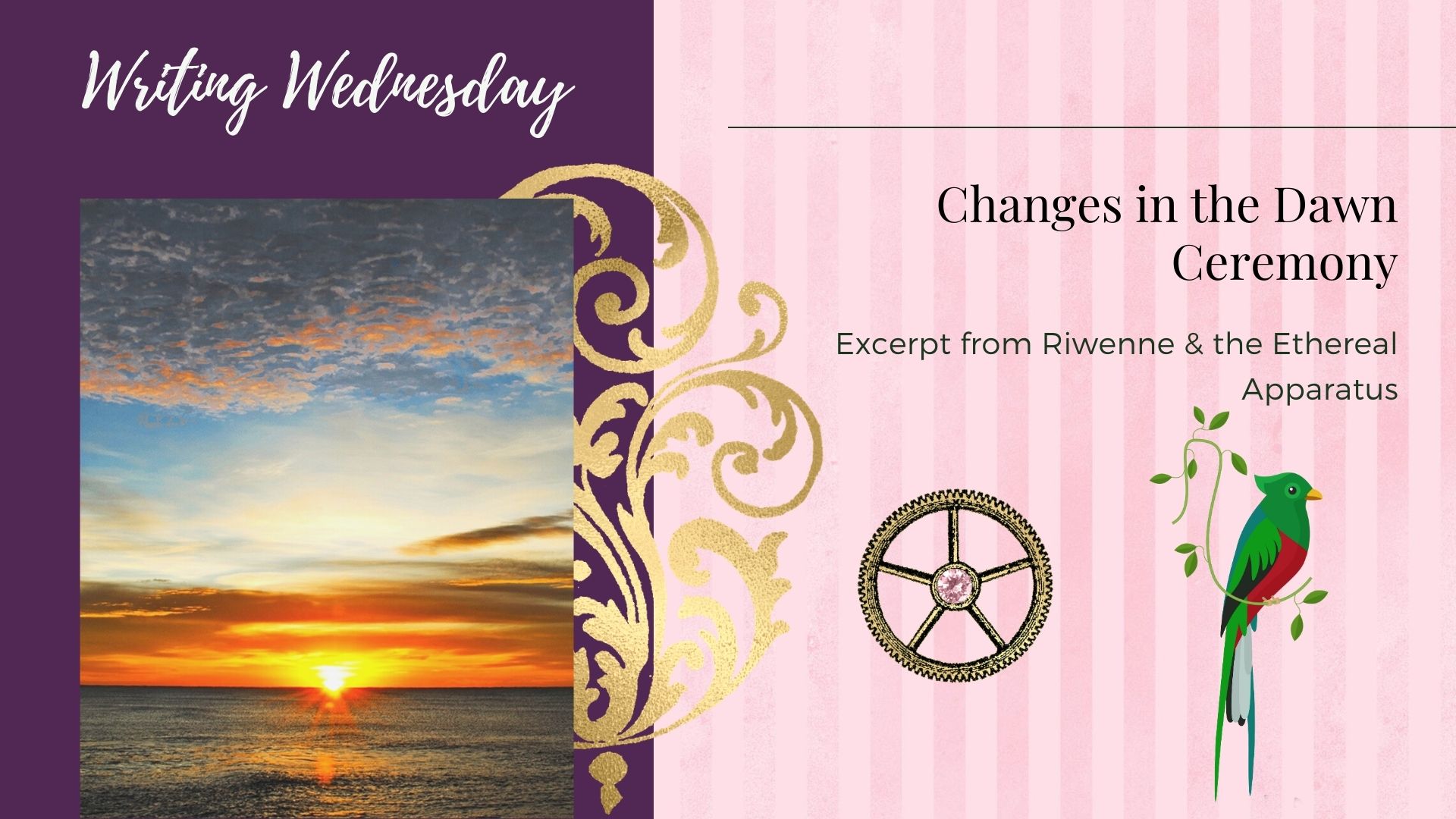 After they decide to visit the site of Riqar’s crash to learn more, Riwenne & her team of divine warriors perform the dawn ceremony in Lyndamon with a new purpose. They will raise magical energy so they can teleport directly into enemy territory. Excerpt from Riwenne & the Ethereal Apparatus.

I’d been a passive observer at the dawn ceremony in Damon Temple every morning for fifteen years. But in the past year, there had been so many changes. First, I’d become a novice priestess in the temple and learned how to participate in the ritual at a basic level, under High Priestess Lyda, when we were still worshipping the sun goddess, Chysa. After Lyndamon City broke free of Chysa’s empire, we’d rewritten the dawn ceremony to praise all the gods except the sun, and now the ceremony was led by High Priest Eberet, with my friends and I playing major roles. When the temple itself was destroyed in an air raid, we’d chosen not to rebuild the old symbol of oppression.

Now we met in an open air square at the heart of the city. There was enough room for everyone to stand and watch, instead of the elite filling the pews inside the temple while the rest of the citizens waited outdoors. A statue of Quilla, the moon goddess, stood in the middle of a fountain. Around the outer edges of the square, there were numerous shrines and altars dedicated to other gods and goddesses where people could pray to any deity who might help them.

Eberet led the long prayer with the rest of us flanking him. He wore a black robe to show his seniority, following the old temple ranks, but the divine warriors’ outfits were designed to match the symbols of the gods who had chosen us. I wore silver for Quilla, Kyra had red for Xiso, Nexita wore Linar’s orange, and so on until we made almost a complete rainbow. The only color not represented was solar yellow.

The only one of my friends who didn’t represent a god was Illari. I’d offered a crystal to her just days ago, but she’d refused divine magic. She didn’t trust the gods and wanted to see what she could achieve with her own intellect and scientific experiments. I’d seen divine magic used to create miraculous feats but also wreak destruction, so I couldn’t blame her for hesitating to take up that power. It would be fascinating to see what she could do when she started combining her mechanical inventions with our magic, working with our other engineers, Deryt and Nexita.

As we prayed, thousands of others prayed along with us. The people of this city were a mixture of former imperial citizens and rebels looking for a safe haven. All of them had chosen to trust us and follow our leadership in a new type of community.

The energy from the crowd grew exponentially beyond what our small team could raise as a group. Most people didn’t have the ability to manipulate magic themselves, but their belief in the gods filled them with energy. Normally, we channeled that energy back to the gods as thanks for their aid.

Today, Amena moved into the middle of the ritual, still carrying Uqra. The shy bird didn’t like being the center of attention so she closed her eyes. Amena focused our power on her, and Uqra’s feathers began to glow.

Writing Down My Dreams