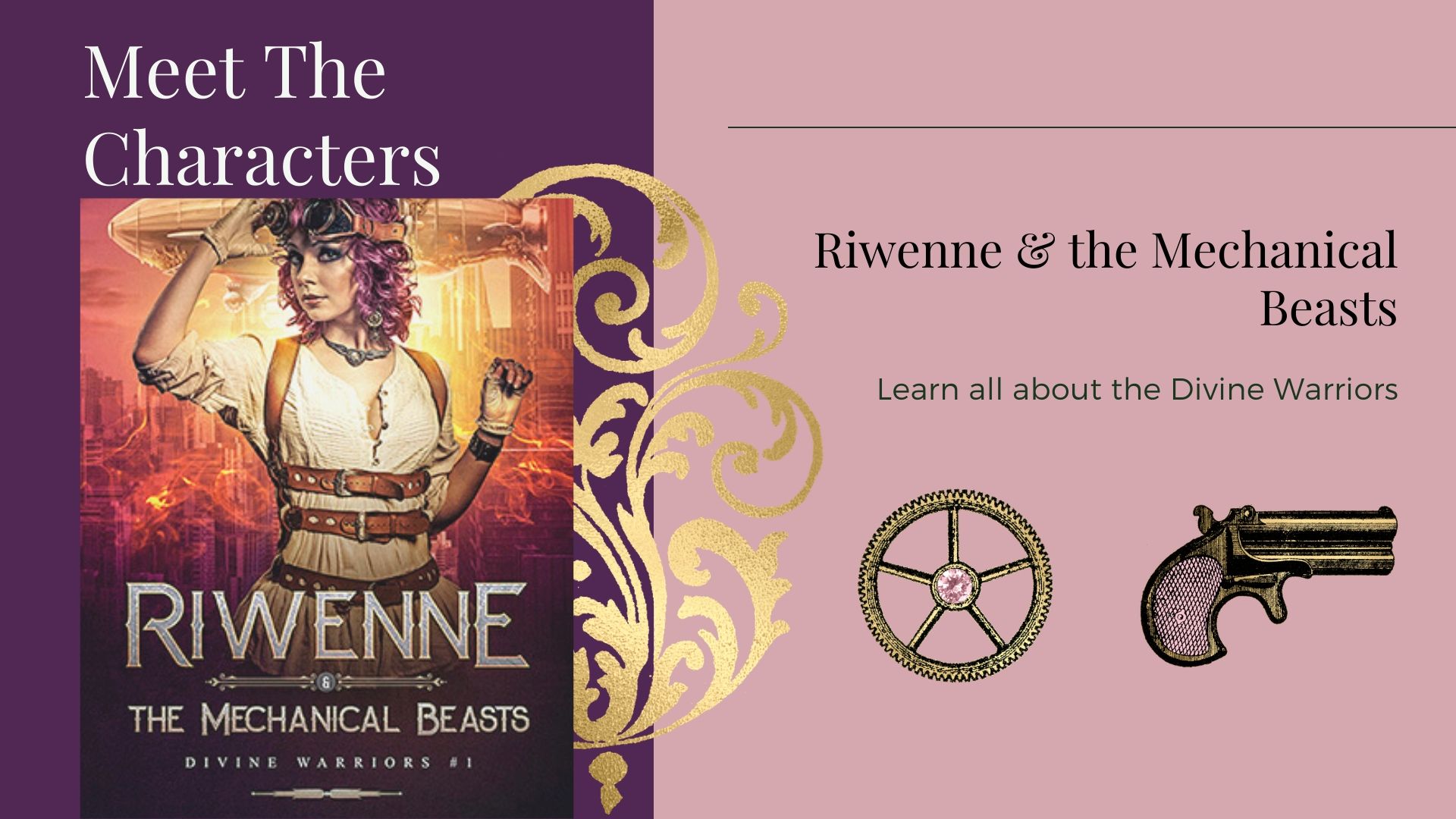 Meet the main characters from my YA steampunk fantasy series, the Divine Warriors, which starts with Riwenne & the Mechanical Beasts. This contains a few spoilers for the first two…

For the final stop on the tour, Louise had some questions to ask the mercenary leader and would-be duke, Galenos. Although he has a reputation for being one of the…

Today, Mathew Reuther hosts me on his blog to talk about female warriors in fantasy once again. This time I talked about some of the common "tropes" or archetypes of…

I'm about to release the first short story of a new series, Tales of Wyld Magic, called "Together We Will Fly". The short stories will supplement the larger Wyld Magic series,…

One of the first lady warriors that I was introduced to as a child was Alanna of Trebond, from the Song of the Lioness Quartet and other Tortall stories by Tamora Pierce. Alanna lives in the fantasy kingdom of Tortall, where only men are allowed to become knights. She swaps places with her twin brother, Thom, and disguises herself as the boy “Alan” so she can train as a knight. Although her true identity is eventually discovered, she manages to become one of the king’s most decorated knights and actually changes the laws of the kingdom so that other women can become knights as well.

Since we see Alanna grow from a young girl into a woman, we get to watch her overcome a lot of her flaws. She struggles to accept herself as a woman and as a wielder of magic, and eventually embraces all of her gifts, not just her talent for fighting. She also has to learn how to control her temper and her stubbornness. Along the way, she learns about friendship and love. END_OF_DOCUMENT_TOKEN_TO_BE_REPLACED

One of my favorite literary heroes of all time is Aerin-sol of Damar, also known as the Dragonkiller. She’s the main character of Robin McKinley’s fantasy novel, The Hero and the Crown. The book tells the story of how Aerin goes from an awkward princess who would rather be ignored by the Royal Court, due the dubious heritage of her late mother, to a warrior who wields a magical sword and saves her entire kingdom from the invasion of a demon army.

There are many things that I love about Aerin. She does many brave things, sometimes foolhardy, but often they are backed up by careful thought. She learns how to fight dragons effectively from studying an ancient history text in the library while she is recovering from an illness. Then she tests her methods with scientific precision until she perfects them. Any warrior who uses her brains as much as her strength is inspiring. END_OF_DOCUMENT_TOKEN_TO_BE_REPLACED

A secret project for Small Town Witch has been in the works behind the scenes. I wrote the script for a bonus story in comic strip form, and artist Captain…

If you have looked at my new website for Small Town Witch, you may have already read the character sheets I posted about the main characters. These include a lot of interesting facts about the characters to help you familiarize yourself with them. Reading them is not necessary for understanding the story, but they may add to the experience.They contain some of the information that I keep for myself to remind me about the characters.

Well, the things that I included on the website were deliberate–and so were the things that I left off. For example, you may notice that I included a “race” designation for all of the characters (referring to which type of magikin they are) but no “ethnic” details. This was left off because it’s not important to the characters or the story, for the most part. The story is not about ethnic tensions or racism in the sense that humans are judged for their skin color. (There is tension between humans and magikin, so those details are explicit.) From the names of many characters, ethnic diversity even in the small rural town can be implied. As far as I am concerned, they’re Californian.

In the same vein, I have not noted any characters’ sexual orientation. This is a little more relevant to the story because sexual orientation is discussed a little bit. But I absolutely did not want to make this an important point in my characters. I want to have diversity in my stories, because there is diversity in the people that I know, but I do not want them to be defined by their sexuality. This is not a LGBTQ story or a time to preach about LGBTQ issues. This is a story that happens to have some non-straight characters. END_OF_DOCUMENT_TOKEN_TO_BE_REPLACED

Day four and I'm in the midst of my first argument with a character. I had it all laid out and was trying to introduce all the normal people, sort…

Continue Reading Heather Made Me